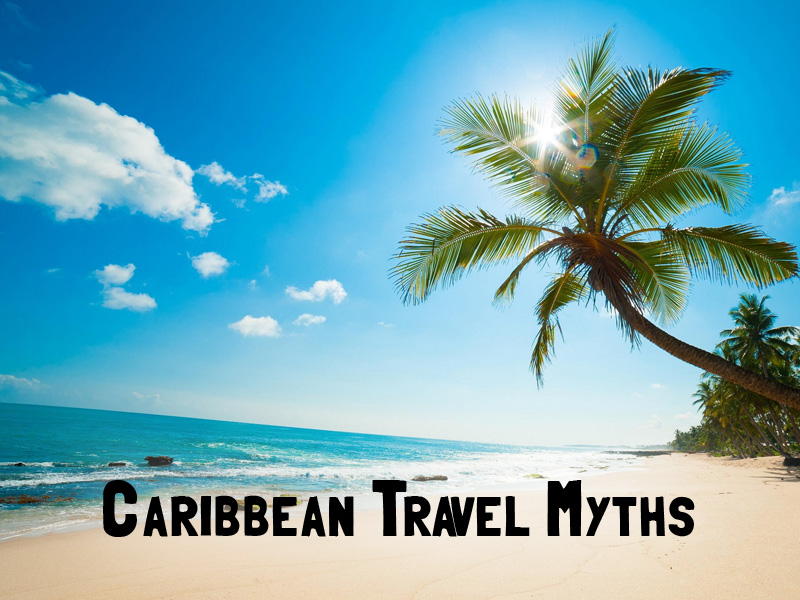 There are many myths about travel to the Caribbean that get circulated on social media and word of mouth.  I decided it would be a fun topic to discuss on my blog.  What myths are almost true, and which ones are false.

10: Caribbean destinations are all the same: FALSE

This is definitely not true.  While most islands are know for great beaches, friendly locals, and crystal clear water, the differences often stop there.  The culture on each island is mostly unique.  Jamaica is very laid back and chill but other islands are such as St. Barts are more “high class” and some say pretentius.  Did you know that some islands are tropical, while others are more dessert-like?  Did you know some islands speak Spanish, while others speak English, French, or Dutch?  Some travelers prefer to stick to English speaking islands as it’s easier to communicate.

Of course it’s true that the weather is usually warm in the Caribbean.  It’s one of it’s strongest selling points.  However it’s not always hot.  During the winter months in the northern Caribbean (example – Bahama’s), the weather can get chilly.  I’ve been in the Bahama’s with weather in the 40’s and with a very cold breeze off the ocean.  In fact, it has been known to snow on certain islands (though it’s very uncommon). So make sure you ask your travel agent about the average temperature so you know if you need to pack a sweater!  Did you know that even in the hot summer months, the Caribbean often times feels cooler than places in the US.  In Buffalo, NY (where I’m from) it’s sometimes feels hotter with the heat and humidity than many of the Caribbean islands.  A nice cool refreshing breeze off the ocean feels great!

8: Everyone talks with the same accent: FALSE

Many people think that all islanders talk with a Jamaican accent.  This is simply not true.  While many islanders have a accent they are not all the same.  Since American’s are not around the accent very often it tends to sound a like.  But those on the island can tell right away where someone is from by their accent.  It’s kind of similar to northeastern US.  Those that don’t visit that area can’t tell the difference between the accent of someone from Boston compared to New York.  If you live in Boston, you know if the person you are talking to is from New York.

7: You can’t drink the water in the Caribbean: MOSTLY FALSE

You can safely drink the water right from the tap on most islands.  There are a few islands, such is Dominican Republic that I advise to stay clear of the tap water.  Most resorts on these islands serve bottled water so there is nothing to worry about.  Many people experience stomach problems that they attribute to bad water when it is more likely the change in diet and types of foods eaten.  For example, I’ve seen people discover Papaya and pig-out on it because it’s sooo delicious.   The next day they complain about the water, when the truth is papaya is a natural and fairly effective laxative and should be eaten in moderation!  The same can happen with certain Caribbean spices.

6: You should never leave the resort when you are in the Caribbean because it’s dangerous: FALSE

Crime happens everywhere in the world.  The truth is crime against tourist is very low in the Caribbean.  I advise you to just use common sense.  Just like there are places you would’t go in the US, there are similar places in the Caribbean.  If you wouldn’t go down a dark, dead end alley in the US, then you shouldn’t in the Caribbean either.  Similar to the US, there are good and bad sections of town.  Stay in the tourist locations.  Don’t flaunt your cash or show off how much money you have.  Often times Americans are frightened when someone from the islands approaches them trying to sell something.  Just because someone talks to you, it doesn’t mean they are going to rob you.  Selling things is how they make their living.  If you don’t want to be bothered simply tell them politely that you are not interested.  The word “respect” carries a lot of wait in the Caribbean.

5: Traveling in the Caribbean is bad for your health: FALSE

Every few years the media likes to hype up an illness in the Caribbean.  The truth is it’s rare for a Caribbean visitor to return home with an illness.  Most illnesses that get talked about involve spread by mosquito.  Most resort area’s spray for mosquito’s regularly and you usually never encounter any of the blood sucking pest.  In fact I get bit my more mosquito’s in NY then I do in the Caribbean (which is very rare indeed).  My bigger fear is SUNBURN!  Be sure to apply lots of sunscreen.

4: It’s dangerous to go in the Caribbean Sea or ocean: FALSE

Water sports such as scuba diving and snorkeling are a huge selling point for the Caribbean.  People often say they fear a shark attack, or stingray attack, etc.  The truth is injuries in the water are very uncommon.  It’s very rare to spot a shark, and if you do it’s usually small and not a species that is dangerous.  Before Steve Irwin (the Crocodile Hunter) died from a fluke accident with a sting ray, the overall theory was they were safe to swim with.  Generally that is true.  Only 1 to 2 people worldwide are fatally attacked by sting rays each year.  Usually in those attacks the sting ray was provoked.

3: Everyone smokes marijuana in the Caribbean: FALSE

The truth is a higher percentage of Americans (16.2%) smoke marijuana than Jamaicans (14.6%).  It’s true that marijuana is used in some religions in the Caribbean but it’s use is not wide spread.

2: You shouldn’t travel to the Caribbean during hurricane season: FALSE

You should travel with caution during hurricane season, but it shouldn’t stop you from planning a trip.  The truth is it’s unlikely that a hurricane will hit while you are traveling.  I recently did a study on Jamaica and discovered on average a hurricane hits Jamaica once every 11 years.  With that being said, it’s very unlikely that one would hit the exact time you are there.  Other southern Caribbean islands are located below the main hurricane belt.  While it’s not impossible for them to get hit, it’s very unlikely.  I always suggest the purchase of travel insurance just in case your vacation plans need to change.

It’s true that not all the resorts are the same, but most have good food.  Higher end all-inclusives usually have great food.  I’ve had some of the best meals of my life at Sandals or El Dorado resorts.  Lower rated resorts often have less food selection and a lot of buffets compared to higher rated resorts that have many specialty restaurants and a very extensive menu.  If you are like me and food is a big part of your vacation be sure to check out the restaurant list before you book your vacation.